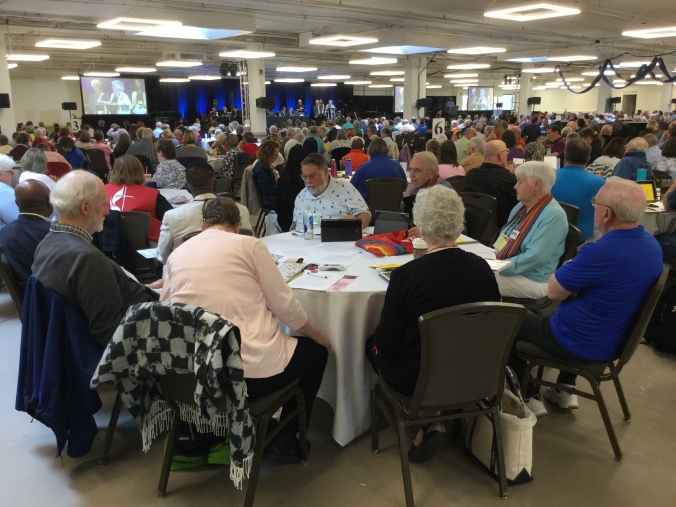 There is a spirit of revolution here at the NE Conference of the Methodists.

For those of you who don’t keep up with Methodist church politics, we, like many denominations, have struggled for twenty years of more over the place of LGBTQ+ Christians in the church. Our official rule book, a nearly 400 page dusty tome called “The Book of Discipline” has in it a phrase that says homosexuality is not compatible with biblical truth.

That phrase has been used for generations to exclude people from the LGBTQ+ community from the church. Technically it only meant that the church would not allow LGBTQ+ Christians to be come ministers, nor would we allow their marriage.

Practically, it was a larger exclusion, a statement that said these people were seen as second class, not really welcome in our churches and our faith.

The continuing study and revelation of bible study, and the changes in our society have created a battle. More and more of us, clergy and laity alike, have come to a place were we believe inclusion is a centerpiece of Christ’s Gospel.

The United Methodist Church has struggled with this. At the last general conference, a council of Bishops were charged to come up with a way forward with the two sides, that would allow the worldwide church to remain united, and settling the subject once and for all.

It was not to be. The Bishops came up with a plan that would allow the church to remain together, but agree to disagree on this subject. That plan was rejected, that rejection led mostly by church leaders in Africa, Asia and parts of Europe. Not content to reject inclusion, they increased the penalties and promised more diligent prosecution for those who supported our brothers and sisters in the LGBTQ+ community.

Many churches, and our NE Conference have been very creative in getting around these rules. The NE conference in particular has been creative, and a bit revolutionary, basically saying we would not follow this exclusion, and that our conference would not persecute pastors like myself, who lived, preached and lived inclusion.

But the new rule makes that creativity a church crime. We are at a place where we can no longer bend the rules and still stay truth to our discernment of what the Bible tells us.

I can’t tell you what is going to happen in the long run, but here, after the first day of the NE conference in Manchester, NH. There is a spirit of revolution. With all the rainbow stickers, stoles, and other paraphernalia, you could get the impression that this church gathering was an LGBTQ+ Pride event.

It’s not of course. It’s a collection of churches and people sincerely trying to figure out God’s will, and live it. More and more, the talk, the handouts, the buzz is that there may well be a split in the Methodist Church over this subject.

It is a remarkably gentle revolution. Both sides who are speaking are passionate but not ugly to each other. Don’t mistake that gentility with a lack of passion. There is an energy here you can feel. A feeling that we may emerge from this meeting having lived a historic moment.

Our wonderful bishop Devudhar is a strong believer in inclusion. He loves the Methodist church, and this battle has taken a toll on him. Despite his position in the larger church, he has been a tireless champion for inclusion. He led the movement to separate the NE church from the world church’s stand. In his passionate speech to open the convention was all about inclusion. It sounded like a quiet call to revolution.

I could be wrong, but that is the sense.

There is no clear indicator, but two or three groups are emerging calling for a rejection of the larger church’s decision, and laying the groundwork for a new Methodist Church. They are getting a lot of attention, and are being given an unlikely amount of access to people at the UMC convention.

Again, I could be wrong, but I believe we will end up with two Methodist Churches. It won’t happen here in Manchester, but my sense is it’s on it’s way and the NE Methodists will be leading the way.

Stay tuned. I will be writing each day of the convention as things unfold.

This made for You Tube version of our Mother’s Day sermon looks at a question many moms, and a fair number of Dads) ask themselves: Am I Good Enough? Using Proverbs and 1st Peter, we seek an answer.

What do we need to be in order to serve God well and transform lives? Less than you think. This week’s sermon from Rupert Methodist Church, adapted for YouTube.

Do we give up on people too quickly? That was the topic of Sunday’s sermon. Based on the parable of the fig tree in Matthew 13.

In light of the recent UMC general conference decision, here is a breakdown of how the decision came about, how both sides make their biblical case, and what this means for the churches, particularly accepting open-hearted churches like ours. (Hint – we are going to stay open-hearted.)

This week we look at being fishers of men, and how imperfection might be just the ticket to filling our nets.  From Luke 5:1-11.

How powerful is encouragement? Powerful enough that God had Jeremiah the prophet put it to work in the worst of times.

Sorry there was no sermon last week. We all missed church here due to the snow. But we’re back this week, talking about autopilot and faith. From the book of Luke.

What do we need to hear when we have failed? (Hint: It’s not “I Told You So.”.  A made- for-Youtube version of the sermon at Rupert United Methodist Church, January 13th.

This is the third week in our month of Advent. It is the week we celebrate joy. But what if our Christmas season is, shall we say, less than perfect? A few of the characters in the bible can show us the way to joy, even when the world around us is pretty rough.